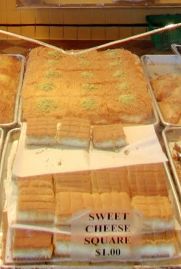 One of my favorite food memories from this year (I'm posting one a day for the month of December) was a solo dinner from New Yasmeen Bakery in Dearborn, Michigan.

Dearborn and I aren't old pals. I had never been there until a business trip in May. One of the few things I had heard about the greater Detroit area was that Dearborn has a huge Middle Eastern population, and in particular Lebanese people, and hence, authentic Lebanese cooking. I think I found New Yasmeen just on a Web search. It's a bakery that also sells hot sandwiches to eat in at little fast-food tables or take away.

The small kofte sandwich cost only a few dollars, but tasted so flavorful. Pungent pickles contrasted with lovely spiced, charred meat, still hot from the grill. The soft lavash bread hugged all the ingredients together, and melted the garlic whip (sometimes painfully called "white sauce" at New York City Halal food carts) every so slightly.

While at New Yasmeen, I also grabbed a hunk of dessert made of shredded wheat filled with a mild sweet cheese, the texture of thick yogurt, topped with ground pistachios and drizzled in warm syrup.


Because I was on a business trip, I ate alone. And I was alone still when I returned the next morning to buy a few baked treats to take on the road.