The Oven in the Dining Room 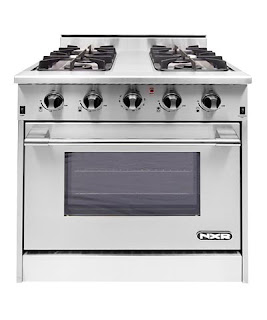 I have a beautiful, brand-new, 30-inch, four-burner double-ring NXR oven (that's a "cooker" to my U.K. friends)... in the dining room.

We, Boyfriend and I, just moved in to a new apartment, the first piece of property I've ever actually owned. Before we moved in, we knew the oven needed to be replaced. The previous apartment owners knew it, too. The oven is dead, they told us. "The range works, but the oven is shot. We fixed it once before for a few hundred bucks, and now that it's broken again, well, you mentioned you might want to buy a new one anyway..."

It's a long story.

The gist of it is: The oven was supposed to arrive in late March. It did not.

We bought the piece from a retailer that doesn't do any installations. We had to. It was the only seller with this particular unit, and it's exactly the one we wanted.

The previous apartment owners were supposed to receive the oven when it was shipped and take care of installation and removal of the old oven, which they could not do because they oven was unexpectedly on back order.

In mid April, when there was still no sign of this oven arriving any time soon, Boyfriend and I accepted the fact that we would have to install it and remove the old oven ourselves. Easy enough, right?

Well, the old oven must have been placed in the kitchen prior to the most recent kitchen renovation, because it's sunk below the tiles and otherwise literally built into the room. Whoever did this renovation also built up the door frame so that it's only approximately 26.5 inches wide. Standard doorframes are a minimum of 30 inches wide. Both ovens are 30 inches wide, and between 27 and 29 inches deep.

So neither the old oven nor the new oven can go anywhere until we remove the door frame.

The tiles are another mess altogether. Again, more shoddy work and corner-cutting by whomever completed the last kitchen renovation: The tiles are built up so that the entire kitchen floor is raised about two inches higher than all the other floors in the apartment. My guess is they were saving money and time by building on top of the existing floor rather than removing whatever was there. And what is there? We don't know yet. We won't find out until we start ripping out the old tile (it's a horrible peach color anyway, but in very good condition otherwise). There might be gorgeous hardwood floors beneath, as the rest of the apartment has. There could be linoleum or other tile. There could be guts. I don't know.

But I am almost definitely going to find out soon.