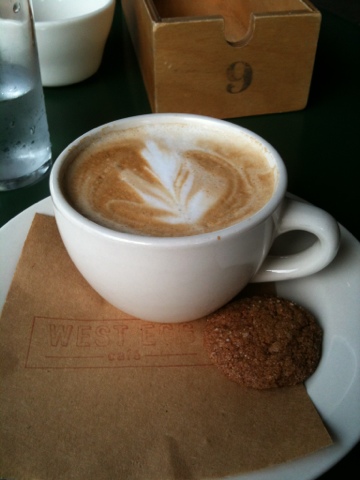 Driving by, West Egg Cafe doesn't look like much, tucked off an ugly intersection beneath a trellis covered in southern climbing flowers. Circle around to the ver new parking garage, and it feel like you've driven into a new but not yet finished condominium, where some high rolling developer decided the area will be more hopping and affluent in just 10 years time. And indeed, that's precisely what you've found in this parking garage shared with the offices of White Provisions Condos. (I swear to you, that's the name I've found for the address!)

Follow bright, new, white and orange signs through the walkways, back put into the bright Georgian light of day, 'round the bend, and hit West Egg Cafe.

A bakery counter and espresso machines greet you first, and to the left, a host's station may or may not be manned. It was not when I arrived one Thursday morning, which made the room feel even more spacious, like people had gone missing in the expanse somehow.

The Coffee
The first order of the day for me was coffee, and the layer of lather on a sumptuous cup of cappuccino ($3) ("With whole milk, please." "Whole milk?") meet my desire. A single ginger snap cookie arrived on the saucer, a welcomed reminder of Europe, where a small piece of chocolate or a tiny biscuit (that is, a dry cookie) comes with your coffee, day or night.

Then the downer: no spoon. For me it's often these kinds of details that cause me to become overly critical of a restaurant or alternatively, fall head over heels for it. Two swizzle sticks and no spoon is not an acceptable way to serve a cappuccino, cookies or no.

The Menu and Service
Another area where restaurants either impress me entirely or undo all their good intentions is the menu. A thoughtful menu should offer choices, but be cohesive. I want some ingredients and prepapation methods to catch my eye, but not too many. I want to be swayed into a meal, rather than go in knowing what I want, but I don't want to feel too indecisive either. Crafting a great menu is a lot harder than it might seem.

West Egg Cafe's menu is spot on. The restaurant keeps breakfast open all day long, but the selection isn't too huge, even when counting the lunch items as well. Southern inflected ingredients are sprinkled throughout, but should you want a straightforward omelet or burger, it's there.

Though quick and attentive, the server didn't rush me one bit, even though I had a table for one. A sizable staff of waiters and busser kept watch over all the tables. Water refills weren't an issue because West Egg puts a clear bourbon bottle filled with water on every table, a nice signature. Another signature is that no one lays out the silverware, setting down instead a wood box containing napkins, knives, and forks. I still haven't figured out why they're hoarding their spoons.

My Meal
I gravitated toward the Blue Plate ($6.25), a bargain meal of two eggs, a biscuit (the Southern kind), choice of ham, bacon, or turkey sausage, and choice of garlic grits or potatoes. The second choice was a no-brainier: grits, of course, because when am I going to be in the deep South again? When I asked about the turkey sausage and whether it was a patty or links (answer: patty), I opted for bacon, three strips of medium cut smokey pork. 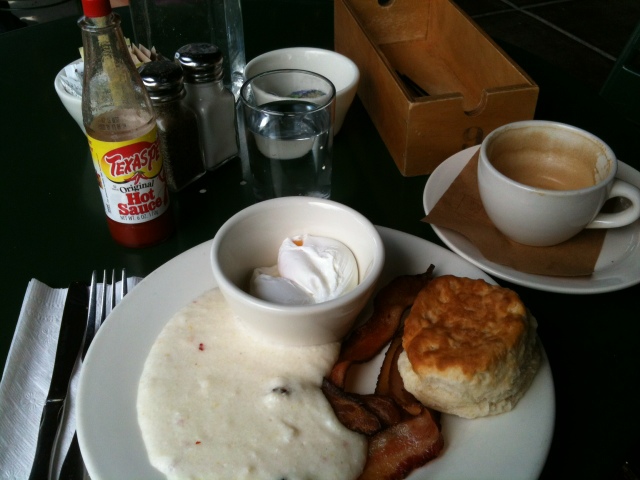 Poached eggs, served in their own small bowl, weren't drained and blotted properly, so they swam in their own now lukewarm cooking water. And because spoons were MIA, I fished out the eggs with a fork, popping the yolks in the process, which dribbled into that disgusting cup of water. Bummer.

Luckily, the biscuit distracted me from the egg fiasco. Heavy yet flaky, barely crisp on the edges of the edges but creamy soft inside, I could have betaken all day to savor that biscuit, nibble by nibble.

Who knew grits could be spicy? Deliciously flecked with red pepper flecks, mild enough for even sensitive eaters, and a perfectly tame amount of heat at breakfast... I don't rightly know why they're called "garlic grits" on the menu, because garlic was hardly their highlighted feature.

With tax, a plentiful brunch for one weighed in at only $9.99. If I'm ever in Atlanta again, West Egg Cafe will definitely make my short list of restaurants and coffee shops, although next time, I'm definitely going to at least ask what's happened to all the spoons.