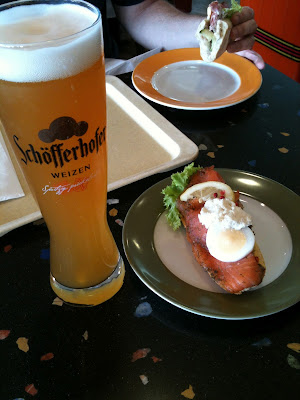 Whenever I travel abroad, I take photos of the airplane food, endlessly fascinated by what constitutes "breakfast" on an overnight flight to Tokyo or an early morning flight out of Paris. But I don't always share pictures of food from within the airport itself. More often than not, it's less than remarkable. Usually, I'm lucky to grab a container of yogurt and a cappuccino, and count my blessings.

Earlier this year, I took a long trip to Berlin, Kiev, and Tbilisi. I didn't think much about the airport food, until I opened up my photos today and remember that it was in fact surprisingly good, especially considering I didn't have any expectations of landing on a tasty meal.

I will say that the best food in the Berlin airport, shown, did take a little hunting down and did cost more than I would normally spend. It's an open-face smoked salmon sandwich, with horseradish, sliced egg, lemon, and what I think are juniper berries. In the background, you might be able to make out Boyfriend's hand holding a rare roast beef sandwich. We shared a Schofferhofer weiss beer because it was our last day in Europe and we were trying to game how to spend the last of our foreign currency in the airport. Two sandwiches and one beer later, we were down to a few cents, if I recall. 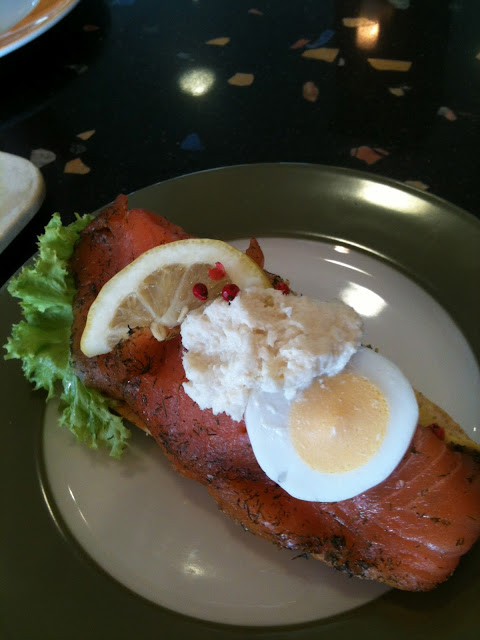 Earlier on this trip, we spent a few hours in the Kiev airport, which had spruced up considerably, according to my friend who is in the Peace Corps and lives there, because the Euro Cup was about to start (which took place in Ukraine and Poland this year). We landed at a sit-down, pre-security restaurant, which is where you find most of the food options in smaller airports outside the U.S. I eyed a Greek salad on the menu. It was June, and all the produce was just coming to market, so I think it was the right time of year to take a gamble on a Ukrainian airport salad.

Here's what the Ukrainians airport restaurant people think of a Greek salad (not shabby!): 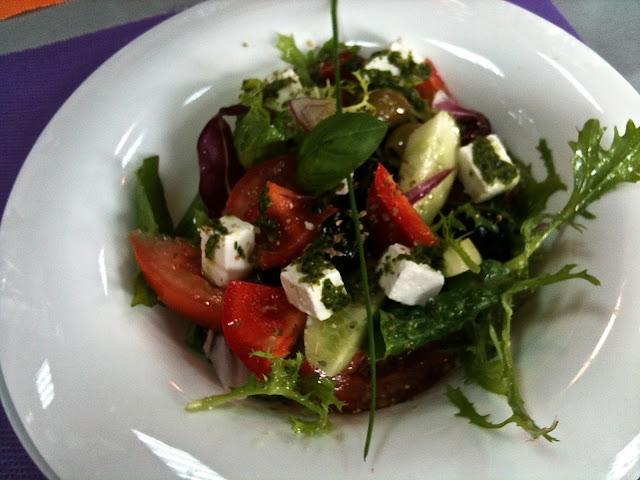 I believe the cheese was Bulgarian feta, which tastes more gamey than American-Greek feta and has a softer texture. The abundance of herbs seemed generous. 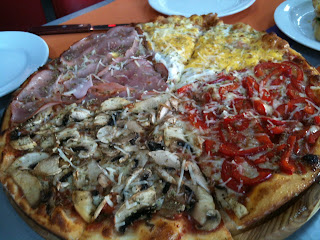 Boyfriend and our traveling partner shared a pizza with ham, mushroom, egg, and peppers. Who knew the toppings would come neatly separated, just like the former Soviet Union countries themselves? Again, having strolled into each of these airport with little to no expectations, I was pleasantly surprised at the quality of what we ordered. Everything cost a lot more, but for airport food, it definitely did not disappoint.

Do you have any remarkably positive or negative airport food stories?