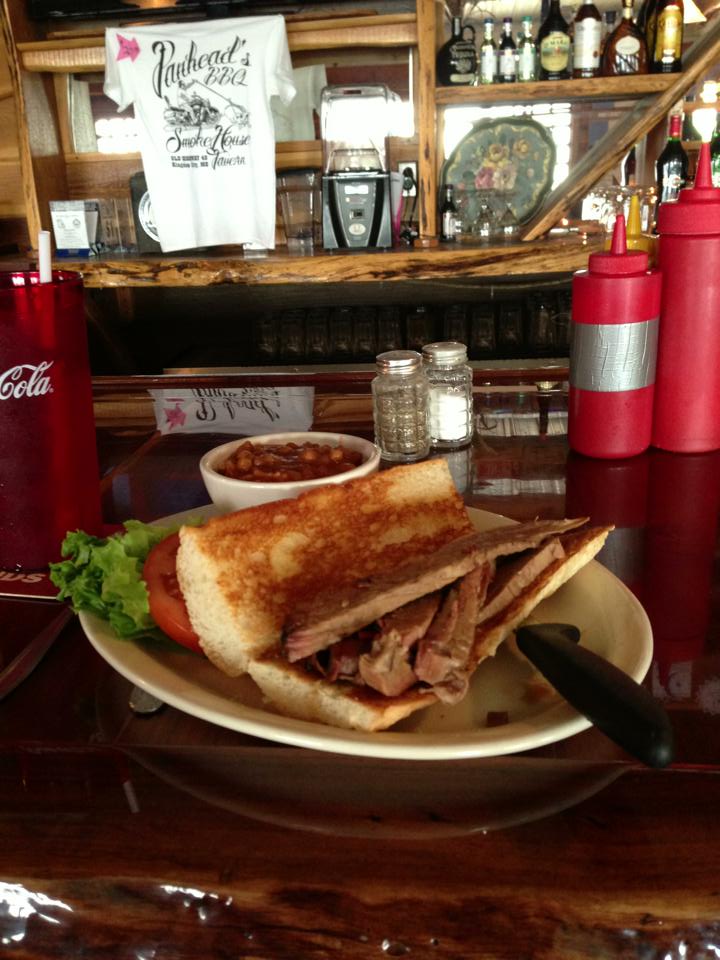 Meaty smoke flies on the wind a quarter mile before you reach Kingdom City, Missouri, along Interstate 70. The highway sign for Panhead's is miles before that point. If you passed Bandana's in Wentzville and Two Dude's Barbecue in Warrenton because it was too early in the morning to eat, then Kingdom City may very well be where you land.

The landscape at that point is still very much Missouri, although another 50 miles or so and it turns to Kansas, the rolling hills leveling out to mere bumps in the road.

When I stopped for lunch, the server asked me in an accent I've never heard before whether I needed an ashtray, hon. I did not. I asked whether she preferred the brisket or the pulled pork, hoping she'd answer pork, but without missing a beat she pointed me toward the beef, which is what I ordered, a sandwich, because surely the plated version would be too much food.

Annual Road Trip
I'm on a road trip that started Tuesday in St. Louis, Missouri, for work. Let me try to explain the purpose of the trip in only a few sentences. I write for PCMag.com, a technology publication that independently tests products and services, then rates them and writes about them. Each year for the past  three years, we've independently tested mobile phone service across the U.S. by getting into cars and literally driving all around the country, running cell phone tests as we go. This year, we have three cars with nine people tag-teaming the driving. The cars each take a different section of the country: East, Central, West.

I'm in the Central car, and my route covers St. Louis, Kansas City, Memphis, and New Orleans. I've never been to any of these places.

By the end, I'll have crossed through five states: Missouri, Kansas, Tennessee, Arkansas, and Louisiana.

Today I'm in Kansas City, although my hotel is a solid 20-minute drive south of the city in Overland Park, Kansas. The other drivers are in Washington D.C. and Scottsdale, Arizona, at the moment, although I think today they are both on the move to their next locations. For updates from the road, follow @PCMPhones on Twitter (usually I tweet from @jilleduffy, but that first handle will have photos and updates from all the drivers as we continue our journeys).