Why We Eat Curry on Valentine's Day 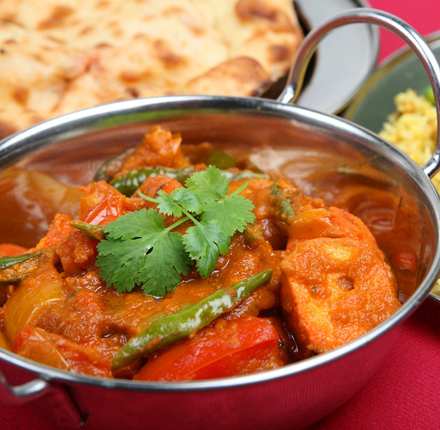 In 2004, I worked for a daily newspaper in San Francisco.

I hated that job.

I worked nights, Sunday through Thursday, from 2 p.m. until around midnight. I think we officially started the shift at 3 p.m., but if you showed up at 3, there was no way you could possibly get your job done.

Valentine's Day was on a Saturday that year, and miracle of miracles, I didn't work Saturdays. It was the first year I really had a plan for Valentine's Day. I had a then-newly serious boyfriend to boot.

We were going to share a calm evening at a restaurant that served amazing clay pot fish and caramel chicken, and in a neighborhood that had plenty of parking (San Francisco is notoriously stressful for its lousy parking). Calm. Easy. Simple. I made a dinner reservation about a month ahead of time. No stress. I was on top of it.

Then one evening at work, February 10, 2004 to be precise, an unforgettable piece of copy came across my desk. It read something like this:


"A popular Vietnamese restaurant and several offices housed in a historic downtown San Mateo office building were damaged in a five-alarm kitchen fire the morning of Feb. 10, 2004. The fire started in the kitchen of Camranh Bay and was confined primarily to the hood of one of the restaurant’s ovens. It was first noticed a little after 5 a.m. by San Mateo fire Battalion Chief Mike Borean and other firefighters housed in a fire station just down the street." [Excerpt from The San Mateo Daily Journal, not the newspaper where I worked, because its online archives only go back to 2006. Maybe that helps you imagine why it was a frustrating place to work in 2004.]

You guessed it. Camranh Bay just happened to be the restaurant where I booked Valentine's Day dinner.

I actually didn't believe it was true. Maybe someone in the office was pulling a prank on me, although it seemed doubtful because I didn't have any friends at that place.

I picked up the phone and called the restaurant. The number had already been disconnected.

I hung up, picked up the receiver again, and called my boyfriend.

"You're never going to believe this," I said, "but tomorrow's news is reporting that our Valentine's Day restaurant burned to the ground last night."

It was way too late in the game to get another reservation anywhere decent. I threw in the towel, and I'm glad.

When Saturday finally rolled around, we ordered delivery food from a really good Indian restaurant around the corner from my apartment. It took ages to arrive, but it was warm and spicy and comforting. Circles of naan filled the table. Fresh green sprigs of cilantro wilted fragrantly into the saag paneer. Juice from the prawns in the prawns jalfrezi dribbled down my chin.

It turned out to be an easy, calm evening after all, even if we did have to worry about parking.

And so for practically Valentine's Day since, we order Indian take-out and just enjoy each other's company without any stress or fuss.