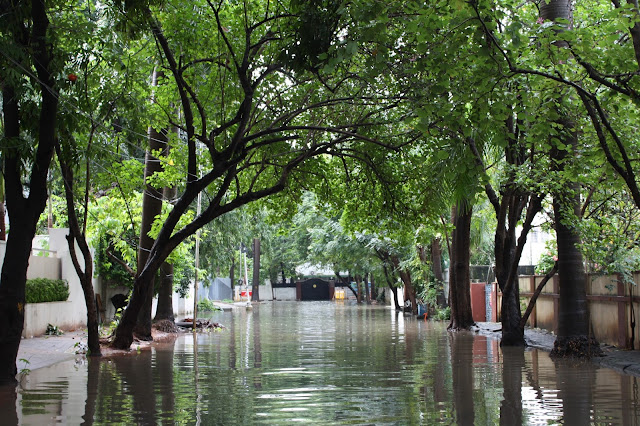 A whir of high pitched purring, an earful of life despite two days of debilitating rain. The frog start to sing at night, after the light dissipates, the sky temporarily holds its breath, and the water in the street settles into a glassy surface. No more auto-rickshaws, motor scooters, cars, or bicycles making waves. The lapping on the sidewalks fades. The frog song reverberates.


A young, skinny man in a freight truck across the street has been sleeping in the cabin the last two nights. The first night he climbed onto truck’s roof, which was covered by a tarp, and began bailing it out with a empty yogurt container. Last night he brushed his teeth using that same cup. This morning, he leans out the window for air. Indian pop music rings tinny and without bass, possibly from the radio, maybe from the last drips of battery power in his mobile phone.

An older but equally skinny man who delivers 50 cents’ worth of flowers a few times a week to my neighbor rolls up on his bicycle, his feet dipping into the murky brown water with each down-pedal. “What on earth is he doing out there?” I say to myself, and watch as he hops off his clunky bike into calf-deep water, bumps his kickstand into place, pulls two small bags from his handlebars, and carries them up the stoop. Delivery as promised.

One glance out the window makes it seem like we’re trapped by streets that have turned into canals. Water fills every inch of low-lying ground as far as the eye can see. From my second-floor balcony, I can survey the scene in three directions. A few police officers slosh down the dead-end, doing their usual rounds, but in flip-flops with their pants rolled up to their knees. A woman hikes up her magenta sari and talks to neighbors in Tamil, presumably spreading word of the conditions, though I don’t speak the language and can’t know for sure. The usual sounds of construction died out two weeks ago when the monsoon rains first let us know that they were coming with an unstoppable force this year.

We measure the height of the water relative to the sidewalks, which are at least a foot off the ground. Yesterday most of the sidewalks were covered. Today, they are slick with slime, but proudly exposing their cement mass to the air and cloudy skies, like a puffed-up chest. Around the corner just south of here, the entire neighborhood is submerged two feet deep at least, the water having crept into people’s yards and slipped beneath their doors until suddenly it's up to their ankles, and they're deciding whether to stay or go.

Further south, the Adyar River has overflown. This is India. The river is not clean. It smells putrid year-round. Everyone who lives or lived along the banks should have evacuated a week ago. The more expensive properties nearby have, by now, all been claimed by the water, too. Where the water finds concrete walls and wooden gates trying to contain it, it pushes against them and wears them down. It breaks free, rushing out violently, sweeping up everything in its path, tree branches, motorcycles, dumpsters, people. “This is not your home,” the water says. “This is nothing more than low-lying earth.” Try to control it, and it will come from the sky instead. The water simply keeps coming. It sprawls and invades and cannot be diverted or contained or sandbagged. The water simply goes.

The Adyar dumps its filthy water, the excrement of Chennai, into the Bay of Bengal where it eventually mixes in with the Indian Ocean. But now, there is no where left for the water to go. It’s as if the sea itself is already full.

Just north, less than a quarter mile from here, the road is dry and a few businesses are open. It seems implausible, as absurd as the flower seller who made good on his promise to deliver. Though I’ve only lived in India five months, I’ve been here long enough to know better than to try and make sense of every incongruity. This is India. Who knows why anything happens the way it does?

Our generator miraculously isn’t out of diesel yet, though we’ve shut down everything non-essential. No air conditioners. No dehumidifiers. Every electronic device is charged to 100 percent. Our bags are packed, just in case. The dog can tell something is up. She follows me around the house, closer than usual, into the bathroom, into the kitchen, onto the balcony even though she hates being outside. I sit on an arm chair with my feet dangling into her bed. It brings a little relief. She lays down and falls asleep with the tip of tongue sticking out.

Every ray of sunlight is a glimmer of hope that more rain will not come. The wind blows the clouds together, though, and sprinkles make new pock marks on the water below.

The worst part is two-fold: Knowing that the rain is not done with us yet, and waiting to see just how bad it will get before deciding whether to flee.

At night, the sun doesn’t so much set as simply recede, almost unnoticed, the way I hope the waters will. As the light turns everything blue and gray, the invisible frogs begin their trill in unison, somehow on cue, a miracle of nature. Their song reminds me that all is not lost, that life will go on, steadily, and without explanation as to how.