Cupcake in the City 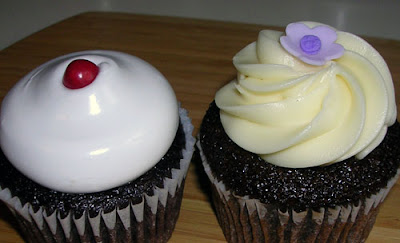 I can’t think of a more adorable pick-me-up than a delicately decorated cupcake. With Valentine’s Day on the horizon, I began to think about alternatives to boxed chocolates, something that would serve as a simple, thoughtful, whimsical, and inexpensive gift that would put a smile on someone’s face. Cupcakes, it seems, would fit the bill perfectly. Apparently, I’m a few months behind the times here in San Francisco, as evidenced by Amanda Gold’s March 2006 article in The San Francisco Chronicle . Needless to say if you read the article, she and I both are about two years behind New York, plus an additional few weeks behind Carrie Bradshaw on Sex in the City.

Nevertheless, I set a challenge for myself: find five of the best cupcake sellers in San Francisco and taste-test my way through their fare in five days.

THE CUPCAKE-A-DAY CHALLENGE
The contenders: Citizen Cupcake, an offshoot of Elizabeth Faulkner’s Citizen Cake, and for its apt name, the first on my list. Miette, an artistic-bent patisserie in the Ferry Building. DeLessio Market, a new gourmet grocer’s with two locations in the city that have been recognized for their prepared, take-home foods. Kara’s Cupcakes, a boutique-style shop located in the Marina neighborhood. Blissful Bites, a laid back bakery in the Inner Richmond.

Day 1: Citizen Cupcake
2 Stockton St. at Market, on the third floor of Virgin Megastore
www.citizencupcake.com
Mokka. $3.50. A super moist and rich chocolate cake. Powerful coffee flavored buttercream on top and hidden inside as a light filling, with cacao nibs on top. That near crystallized/gritty texture found in classic buttercreams always plays with my memories of childhood, and paired with strong adult coffee overtones, the contrast was as pleasant on the palate as it was to my psyche. A few cacao nibs sprinkled on top made the cupcake that much more fun to nibble away at.

Packaged in a miniature Chinese food take-out box, the get-up was indeed cute. The woman behind the counter took my suggestion of taping the box closed in teepee formation so as to not damage the peak of the frosting. However, removing the cupcake posed a challenge, as there was no room for even a finger to reach in and lift it out without marring it. Wielding a plastic knife with the accuracy and steadiness of a surgeon, I was able to gently pry the cupcake out of its chamber, in perfect condition. 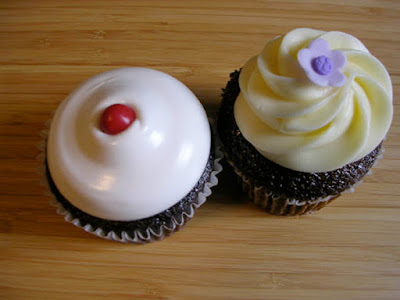 Old-fashioned (chocolate with marshmallow) and Gingerbread. $3 each. The Old-fashioned had one of the best “icings” I’ve ever had. Smooth and lush, the marshmallow was gooey and viscous, without being messy. The cake itself can only be described as truly old-fashioned. It wasn’t overly rich or overly moist, but just perfectly classic—exactly how chocolate cake tasted at birthday parties back in 1984.

Opened by baker Meg Ray in fall 2001, Miette is the eye candy of the Ferry Building due in part to second-in-command Caitlin Alissa Williams, the artist of the duo. The patisserie specializes in treats that are visually inspired by artist Wayne Thiebaud. Everything in the bakery case, cupcakes included, has a storybook look about it, in soft pastel colors and matte finishes.

Miette’s Gingerbread cupcake was one that I most looked forward to tasting. Topped with cream cheese frosting and a single lilac-colored candy flower, the gingerbread cake was worlds away from the Old-fashioned. I bit slowly through the cake, dragging my teeth through every dense, moist mouthful. I angled each bite to try and snag just a little pale yellow cream cheese frosting each time, the hint of sweet cream butter juxtaposed sumptuously with the mild tanginess of cream cheese. In a two-cupcake carrier with handles and sides that opened easily, the box used for packaging allowed me to slide the cupcakes out rather than lifting them. Miette’s little handled box was the best carrying device I encountered during The Cupcake Challenge. 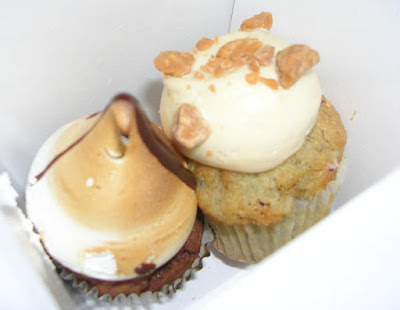 Peanut butter mousse on chocolate brownie with meringue and Banana cake with caramel buttercream and butterscotch chips. $1.50 each. I found DeLessio’s mini cupcakes (they’re just about the size of a silver dollar in diameter) on a tip from an acquaintance. By far the most decadent cupcakes in my challenge, the Peanut butter mousse on chocolate brownie was something to behold, a little towering work of art with a meringue tip stretching high into the air, drizzled with chocolate sauce. A compacted nugget of chewy brownie sat as the base, holding up a dollop of light and creamy peanut butter mousse, covered by a soft, marshmallow-like meringue. This was the heavenly sugar rush I had been dreaming about in a modern updated cupcake. The banana cake, on the other hand—a departure from my typical taste, but something I chose for its uniqueness—was a bit dry, lacking the moistness of a homemade banana bread. On top: a round dollop of sugary buttercream that had absolutely no grittiness whatsoever. Butterscotch chips, with the consistency of chocolate chips, were gingerly sprinkled on top and provided a nice texture contrast without being jarringly crunchy.

Though far from being the most traditional, the brownie bite, with its irrestible salty peanut butter goodness, takes the cake for being the most decadent.

DeLessio’s is a new gourmet food store with an incredible to-go section of prepared foods. One of the downsides of their cupcakes is that they are not protected behind a bakery case; they’re on display trays in the self-service area, meaning they're open to more customer contact, and thus ripe for damage or poor handling or germs. Additionally, the options for take-away containers were Chinese food boxes in several sizes, so like the dilemma I had with Citizen Cupcakes’ carrying device, I again faced the problem of removing the cupcakes without marring their presentation. What’s worse, I was responsible for getting the cupcakes into the Chinese food box, too, man-handling these delicate and petite desserts with 12-inch tongs. 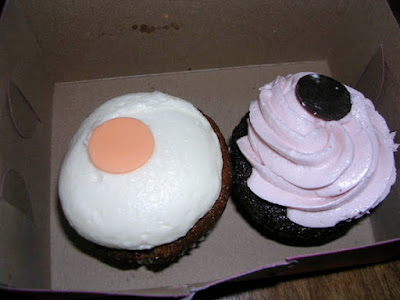 Kara’s Karrot with cream cheese and Raspberry Dazzle. $3 each. Kara’s Cupcake was by far the place I most looked forward to visiting, as it was a new find for me, though the shop has been open since late 2005. I browsed the website and had set my heart on trying the Fleur del Sel, a chocolate cake with caramel filling, soft chocolate ganache, and fleur del sel. By the time I got to the Marina on Sunday, however, Kara’s was out and the staff informed me that there wouldn’t be any more for “a while.” It was a bit of a let down, compounded by the fact that the shop keepers were hustling a bit too much for the leisurely, gawking atmosphere that I had had in mind. I almost felt bullied into ordering, which is how I came to settle on the Raspberry Dazzle, another departure from what I would normally lean toward. At least it had chocolate. Kara’s Karrot, on the other hand, I had my eye on early and was anticipating wildly.

Kara’s Cupcake uses only local, organic ingredients, and it shows. While some of the other cupcakes I tasted left me wondering just how wide the profit margin was (cupcakes being very inexpensive to make, and at an average of $3 each at retail). With Kara’s, every ounce of organic butter, cream, fresh eggs, and other ingredients shows, making these the best value cupcake on my list. The cream cheese frosting on the carrot cake cupcake, for example, was smooth and as airy as whipped egg whites. The cake was fluffy and speckled with bright orange carrot bits. Even the raisins in the cake were flavorful. As for the other, chocolate raspberry isn’t something I would probably order, though I did appreciate the swirl of buttercream on top, the raspberry essence at the front of its taste, and the velvety weightless texture.
Packaged in a bright pink bakery box, the two cupcakes had a bit of room to slide around. Though getting the cakes into and out of the box was a breeze, I had to balance the box gingerly while transporting it, afraid one might have enough room to tumble onto its side or bump frostings with the other.

Kara's Karrot wins for being the cupcake I'm most likely to eat again, even if it means I have to ride the 43 bus all the way to the end of the line again. Kara of Kara's Cupcakes recently informed me that a new shop will be opening in April in Ghiradelli Square. For now, a trek to the Marina will have to do. 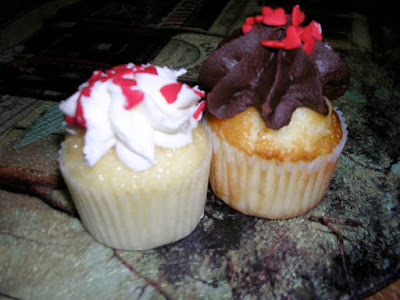 By the time I settled on Blissful Bites being my last stop on The Cupcake Challenge, I was in the mood for something simple and homey, something that would taste good, but wouldn’t shatter my world and all future expectations of how cupcakes should taste (Kara’s Cupcakes raised the bar a little too high, and I worried that no cupcake would ever be the playful and relaxing treat it once was). Blissful Bites had two flavors of frosting (vanilla and chocolate) on what was essentially the same cake (yellow) in two sizes (regular and mini). Being near to Valentine’s Day, there were sprinkles: red hearts. I ordered two mini cupcakes, one of each flavor, for $1 each. Things were looking up.

Although Blissful Bites had by far the worst packaging, I was almost giddy with joy when the woman behind the counter handed me a white paper bag in which both tiny cupcakes promptly tumbled over. By the time I got home, they had been knocked about, squished side-by-side, smeared together, and otherwise mistreated. Pulling them out of the bag, I realized (as you can see from the photo) that very little actual damage had been done. The frosting, dry to the touch, had already long before become cemented into place.
Now, I don’t want to give the impression that these cupcakes were bad. In fact, they were heavenly, if heaven is a place where you’re allowed to put your feet on the sofa. Eating these little cupcakes felt like the equivalent of putting on sweat pants after a week on the road in business suits. This was comfort food. These were the cupcakes that, for a buck, you could buy for children. Why waste $3.50 on a cupcake made with Scharffenberger premium chocolate and Petaluma Farm Fresh eggs when the younguns are just going to stick their fingers in the frosting and mash the entire cupcake into their mouth in three bites maximum?

Surprisingly, when I actually started to take my time and really taste what was going on in these kiddie cupcakes, I began to notice the subtle flavors that make cakes stand out. The frosting, for what it’s worth, tasted like it came out of a tub—but I’m sure not complaining about that. The cake, however, became more and more pronounced the closer attention I paid to my taste buds. Vanilla with a touch of lemon came through in the cake with white frosting, while a buttery crust emerged from beneath the chocolate one. Yellow cake versus vanilla cake. It’s a distinction that’s easy to overlook, but one that made a difference in terms of how I view Blissful Bites: a comfortable family-oriented bakery-cafe that takes itself seriously, but not too seriously.