My Life with the USDA: Part II

Two weeks eating off the pyramid

For the past two weeks, I’ve been using the USDA’s My Pyramid Tracker, an interactive system that incorporates an online food diary, exercise diary, and analysis of one’s healthy eating. My goal was to eat as closely as possible to my daily recommendation, as computed by the U.S. Department of Agriculture, the government arm that has brought us such memorable guidelines for healthy living as “the five food groups” and “the food pyramid.” About two years ago, the USDA revamped its message, began to incorporate technology, and devised a system that could give individuals a much more balance diet recommendation based on their body, age, and gender (see part one “My Life With USDA,” in the March 2007 archives of this blog for more).

So, for two weeks or more, I have been eating off the recommended food pyramid as generated for me and my 5’8” 20-something-year-old female body.

Sometime around Day 3 of this regimen, I was filled with great expectations of more healthful living—early morning jogs, a slimmer waistline, dinners of home cooked kale and wild rice and precisely 3 oz. of poached tilapia, strong calcium-supported bones and teeth until my 70s, and a smoking bod to fill out my bathing suit this summer. Then I hit Day 12.

“I don’t know what’s happening!” I shouted, my eyes scavenging the area around Powell Station, trying to remember exactly how many blocks away the Ghirardelli store was. My head spun in a flurry, and I jittered like a drug addict in need of a hit.
Desperation: “I need to eat a hot fudge sundae with crumbled up cookies on the bottom, and a brownie, and six pieces of chocolate bars wedged into the top! Right now!”

My face flashed hot with sugar cravings. “What’s happening to me?”
Poor Boyfriend. He’s always the one to put up with this kind of stuff. I was clearly in the throes of a major meltdown (just thinking of the word “meltdown” made me completely fixate on the image of a towering bowl of ice cream again) and he was trying to have a normal, intelligent conversation, trying to explain to me the nuances of a New York Times Online op-ed written by Slajov Zizek, a topic of conversation that made my eyes blink compulsively; the words hit my brain and seemed to bounce directly off.

As the scene occurred, I had a minor out-of-body experience. My body, my physical being could not focus on anything other than an ice cream sundae. My sanity, however, was thinking, “Oh, the poor boy. The very least I owe him is to pay attention to whatever the hell he’s talking about. What the hell is he talking about? And where can we find ice cream?”

I was really losing it.

I realized that Boyfriend probably didn’t fully know what the last 12 days of my food journaling had cost me. For one, I explained to him, I hadn’t let chocolate pass my lips, except for precisely three times: once on Day 1 when I opened a box of just-arrived Girls Scout cookies (the vanilla rectangular cookies with a chocolate strip on the back); once when I sampled a sliver of chocolate while power-walking through the San Francisco Ferry Building; and once while on a business trip to Chicago when I took a break to sip a mocha in Border’s.
Bear in mind, this is coming from a person who had virtually eaten some form of chocolate every single day since she was about 10 years old. I used to squander $0.50 of my lunch money as a child to buy a brownie from the school cafeteria. And now it was as if all the cravings I might normally experience over a 12-day period were crammed into a single moment. I was in major sugar withdrawal… or so I thought.

Boyfriend and I decided to head up to Starbucks and split a skim milk mocha, just to take the edge off. When we reached the cash register, a row of Vitamin Waters caught my e ye, and suddenly, it became clear to me what was really happening: I was thirsty.

Correction: I was really really thirsty.

Earlier that same day, I had eaten breakfast sometime around 7:30 a.m., then left the house for a meeting and didn’t come home until almost 1:30 in the afternoon. I hadn’t had any snacks before lunch (I usually munch on at least an apple or an ounce of almonds), and I had a cup of coffee at my meeting. Then we had lunch at a Chinese food restaurant called Nan King Road (I recommend the “double happiness”). The dishes were relatively healthy, filled with eggplant, snow peas, string beans, bell peppers, lean chicken, and shellfish, and served with steamed brown rice. But the sauces were more likely than not loaded with sodium. Ergo by 3:00 in the afternoon, I was really very thirsty.

I drank the entire bottle of Vitamin Water within minutes. I spent the rest of the day drinking water. When we got home, I drank and drank and drank. I even woke up the next day slightly dehydrated and drank another two or three glasses of water.

I’m still pretty shocked that I hadn’t thought about my state of being consciously enough to recognize that my body needed liquid. My initial reaction (to crave ice cream) wasn’t totally off; I was looking for something creamy, something to quell the salt and satisfy the need for cold liquid. It’s rather amazing how our bodies and brains can fool us about something as simple as ingesting too much sodium.

Counting Calories
Aside from my one major meltdown, my experience trying out My Pyramid has been mostly positive. However, although I’ve been using the tool for more than two weeks, I still don’t feel like I’ve quite mastered it. I continually discover discrepancies about the content of what I consume compared to what the USDA estimated its content to be. For example, the Lifeway brand low-fat plain kefir that I drink has 120 calories, 2 grams of fat, and 14 grams of protein per 8 oz. serving; for the same serving size, My Pyramid calculates 98 calories, 2.2 grams of fat, and only 8 grams of protein. The USDA also thinks a regular pizza pie is 12 inches in diameter and that one slice, or one-eighth of that tiny pizza, contains only about 165 ca lories. Fat chance, USDA!

Another issue is that the nutrient intake does not provide a read out for sugars. Instead, it shows carbohydrates, which doesn’t necessarily comprise only sugar. My understanding of sugar intake has developed by looking at food labels, which always show sugar in grams on the nutrition printout. But I don’t know how “carbohydrates” effectively differ or how I should read my intake of them.

To make a fair comparison, I tried out another online food journal (my-calorie-counter) one day, entering all the same foods that I entered into My Pyramid Tracker. After breakfast, lunch, and snacks, the difference in total calories consumed was only 56, so between the two, I feel like they were pretty close to being in agreement on total energy intake. However, the new food journal calculated my total fat intake at 28 grams, but the USDA reported it as 32.2 grams. Another feature I liked about my-calorie-counter that I would like to see in My Pyramid is a breakdown of basic nutritional information per food consumed (see the image for an example). The downside is that only paying members can see the totals tabulated for the day. And since I didn’t want to pay, I just whipped out my trusty calculator and ran the totals myself. 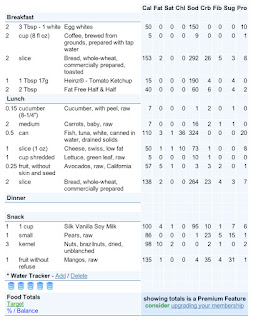 My-Calorie-Counter is an alternative food journaling tool to the USDA's My Pyramid Tracker, but it's not completely free

Odd Birds
Did you know soy milk counts as meat? On My Pyramid Tracker, it does. Once I discovered this, I felt the need to further investigate the nutritional value of an actual glass of Silk soy milk against the values the USDA assumes. The Silk package calls 1 cup 1 serving, and says it contains 100 calories, whereas My Pyramid Tracker estimates the same amount to have 120 calories.

What I would like to be able to do in My Pyramid is create my own foods to add to the existing database either from scratch or by modifying and renaming existing foods. Then I could lower the number of calories in a glass of soy milk by 20 and rename it “plain Silk soy milk.” If this feature does already exist, I sure haven’t found it, and I’ve been using the tool rigorously for more than two weeks. Here’s another example: The whole wheat (and whole grain) bread that I eat has 100 calories per slice according to the package, but the USDA configures “1 large slice of whole wheat bread” to have only about 79 calories.

The USDA has a pretty comprehensive list of consumer packaged brand foods, from Weight Watchers to Nature’s Valley, but I often can’t find some of the brands I eat on a regular basis. I’d love to the USDA reach out to major food makers and ask them to populate the database with more of their own foods’ nutritional value, too.

If you’ve never kept a food journal, I highly recommend trying it, either with the USDA’s system, or on paper (you can look up the caloric content of each food easily on the web), or with the help of another online tool. Taking just two weeks to watch exactly what foods you consume can be not only a wonderfully eye-opening experience, but also a highly educational one. It’s a shame how little the average person knows about nutrition, and learning the basics doesn’t take much time or effort.