I went to see Jamie Oliver at Barnes & Noble earlier this week. He was in town promoting his new book, Jamie at Home, which is about his new affinity for gardening and growing his own food.

Unfortunately, he barely spoke! He showed up on stage about 8 minutes late, gave a quick review of the theme of the book, noting that even New Yorkers with limited space can usually cram a few herb pots onto their windowsills and rooftops, answered three audience questions, and then got to signing. The whole thing was over in less than 20 minutes. 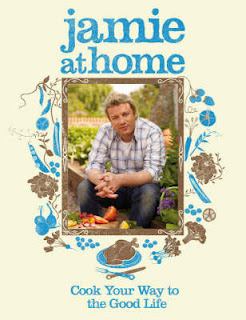 Earlier in the day, he was a guest on a local NPR show, so at least he spoke a bit more there and answered more intelligent questions. (The final "question" at the book signing was -- I kid you not: "I'm Korean. I love you and came from Korea to see you. Korean food is very healthy, mostly steamed and with little oil. I want to know if you like Korean food, will visit Korea, and I can teach you to cook Korean foods.")

While I'm not the biggest fan of Jamie Oliver, I do appreciate the activism roles he's taken on. He has experimented with helping under-privileged youth, former inmates, chicken farmers, and all of the U.K. by pressing issues about the sorry state of their grocery stores. I also had a chance to flip through some of his new book and look at the gorgeous photos of his garden and some of the dishes, which are grouped by season according to harvest.

One of the simplest but most appealing photos, which I could not find online, was that of pancetta-wrapped asparagus, broiled, and served with soft-boiled eggs in their own shells as cups. The idea is to dip the spears into the egg. Oliver even suggests serving the eggs in a paper egg carton; the photo showed one of those indigo colored half-dozen carton, which was a gorgeous color contrast to the bright yellow yokes. Even though I couldn't find the precise photo, imagine something along the same lines a the two images I've cobbled together here.