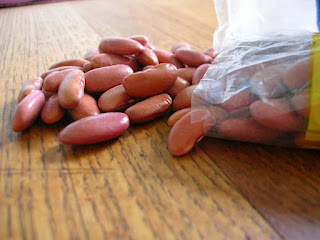 For Mother’s Day, I bought my mom a blue watch with orange seahorses on it. This is not the kind of gift I usually give. The fact that it’s plastic and the fact that it cost only $15 makes me worry that it will be seen as a cheap gift. And because I actually am cheap, but don’t want other people to see me that way, I usually overcompensate in the other direction and try to give gifts that are generous, both in thoughtfulness and expense.

I shouldn't sell myself short, though. The little seahorse watch certainly was not a thought-less gift. When I was visiting my mom a few weeks ago, she mentioned that she liked my watch, which is the same style as the one I got her, only with a different pattern. Then she said she needed a new watch. See? I had listened. I had paid attention. But then I only spent a lousy $15.

On the other hand, I’m technically unemployed, and for this simple fact, people have been explicit about cutting me a break or two, which, sadly, is a double-edge sword. If my friends ignore the issue completely, I find myself tactfully bowing out of spending money, like ordering another round of beer or going to restaurants. When people do cut me a break and give me an out about spending money, I feel like I’m wearing a scarlet “U” on my chest. It's been tough to feel out how much I should and should not bring up the "U" word: unemployment. I don't want to be ashamed of it, but I don't want to overcompensate by drawing attention to it needlessly either (for example, the original title of this post was going to be "Unemployment Bean Salad.")

I was laid off from my job eight weeks ago. Since then, I’ve collected a chunk of severance and completed a freelance job or two. Tack on to that unemployment checks and a decent amount in savings, and I’m not in any position to complain or even fret about money. It’s the uncertainty that terrifies me.

Money Matters
When I was younger, my family lived through some tough financial times, not due to loss of employment or external economic factors, but because my mother married a man who became a hard drug addict. Every dollar within sight disappeared—and fast. We were always in debt. There were always people coming and going from the house, looking to borrow money or collect money that had been borrowed.

It’s not something I talk about much, and when I do, it’s not something I talk about emotionally. I only bring it up now because it is the root cause of my feelings about money, about the shame that's associated with money, both in not having it and having plenty of it. During the years when we had no money—and by “no money,” I mean that our power had been turned off in the house, and then the house was sold, but no one was qualified for a mortgage to buy a new house, so we were technically homeless for four or five weeks until we secured a place to live—my method was to work as hard and as often as I could, and then stash away everything.

My philosophy, I guess, was to sever myself and my own financial circumstances from my family’s. I remember hiding money (which doesn’t really work around drug addicts—they’re like hound dogs). I remember opening a bank account without telling anyone. I remember being bullish with my boss at the bagel shop about how many hours I could handle working during finals week in tenth grade. And even before that, I remember the routine of being driven home by some fatherly figure at one o’clock in the morning after babysitting, who would always ask, “Wait, how old are you again?”

I stashed away as much money as I could. But everyone knew. The next morning, after a babysitting job, my mother’s husband would ask me how much I made. What time did you get home? How much an hour are you charging? He’d do the math and then say, “We have nothing to eat, and your sisters need diapers. Give me 40 bucks.” I'd hand him two twenties knowing I'd never see it again.

In addition to being cheap, I have a major guilt complex, and money is precisely where it comes from. Growing up in a big family—there were as many as nine of us in the house at a time—there is a constant struggle between watching out for yourself and watching out for the group. Anyone who grew up with a few brothers and sisters knows the joke about eating dinner with two hands: one for shoveling food into your mouth, and one for guarding your plate. You develop a canine growl to fend off scavengers who at any moment might swipe the pepperoni off your pizza, or the new pair of jeans from your drawer. You learn to share a room, share a closet, shoes, chores, friends, pets, attention. And the moment you try to have something just for yourself, you are made to feel like you are selfish, stingy, ungrateful.

If you take this concept of family sharing and put it in the context of a very poor household, anyone who has money that she is not sharing is made to feel like a fascist. Keeping $60 only for myself was seen as depriving everyone else of basic needs, like food, toilet paper, fuel.

The circumstances don’t really matter, either. Or maybe they do. Maybe if the cause of our hardship hadn’t been drug abuse, I wouldn’t feel so tormented about making personal sacrifices for the rest of my family. Maybe if we had all been immigrants, struggling for work through language barriers and citizenship status, crammed into a one-bedroom apartment, the mentality would have been different. But we weren’t. We were white, English-speaking Americans on Long Island living with a drug addict.

Learning to Sing My Praises
I had a job interview the other day where the man interviewing me pulled a little bit of a power play. I could tell it was half in jest, but he was half serious, too. He essentially told me point-blank that he intended to pay the person he hires way less than she or he is worth.

It wasn’t really surprising to hear him say that, based on what’s going on in the job market at the moment, but it rubbed me the wrong way. I left the interview a little bit stunned, and have gone over and over the things I should have said (which I know is what everyone does on job interviews, but it was particularly the case for me this time).

While the interview was happening, I felt like I focused too much on how to deal with the interviewer's personality and power dynamic, and not enough on the content of my answers. I should have talked more about the kinds of hooks I would use to draw in readers. I should have talked about my ideas for writing about prototypes of products rather than products that have been on the market for three months. I should have discussed why I think hardware and software can't really be dealt with separately anymore. I should have sung my praises loudly, called attention to my achievements, and steered the conversation where I wanted it to go. But what I did, or so it seems to me in hindsight, was clam up and go into a defensive mode, acting more reserved and more composed to overcompensate for the fact that I didn't know how to offensively thwart the disarming tactics this person was throwing my way.

However, I’m not a reactionary person, and it takes time for me to assess a situation and approach it in a rational and unruffled manner. I think this is why I'm a writer. I like to think things through and craft an idea, then hone the language surrounding it before I present it.

I don’t really know how the interviewer expected me (or anyone else) to react to his open acknowledgement that he will knowingly undervalue the person he hires. Again, I think this was part of the half-joking power play, but it still struck a sour note.

The Great Nurturer
So I’m wracked with guilt about buying my mom a plastic watch with seahorses on it, and emotionally distraught over the fact I haven't figured out the best way to talk about my job status, and worried that I don’t know how to stand up for myself.

It’s time to turn this conversation to food.

Food is the great nurturing element in my life. No matter what the problem is, food helps. If I’m feeling bad about my body image, eating healthful foods rejuvenates me. When I’m uninspired, the magical process of baking never ceases to amaze me. At times when money has been tight, being able to concoct a hearty meal out of nothing more than dried beans, olive oil, and a few herbs helps me to see that I am a resourceful person who has every right to be confident in her abilities.

Once beans have been thoroughly soaked, drain them and place them in a large pot. Cover beans at least an inch deep in cold water. Set over low heat and cook for 40-50 minutes, until beans are tender. Drain.

While still warm, add the garlic and stir. Next, sprinkle the beans liberally with salt. Gently stir in the parsley and celery. Add olive oil to taste, about 1 tablespoon. Serve warm. Serve with lemon wedges if desired.

Variation: Although I like the color contrast of the brick red kidney beans and green parsley, cannelini beans are also an excellent choice for this simple dish.