What I Want vs. What I Can Get: A NYC Chocolate Journey 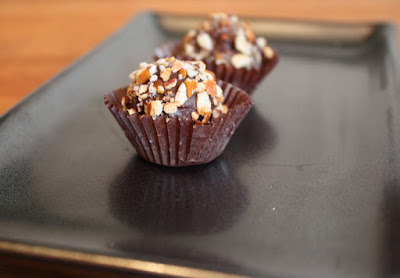 Sunday, one of the first real hot and humid days in New York, I decided to go on an urban expedition in search of chocolate.

My hankering started a few weeks ago when I went to a Whole Foods and couldn't find anything in the chocolate selection that I actually wanted. "Give me some choice!" I said to myself. There were Dagoba bars, several pieces from that dude who makes salad dressing (the Newman's Own line), a few items from Whole Foods' 360 Organic line, and not much else.

I wandered around the store. There was more chocolate, Valrhona (French) and Vosges (from Chicago, despite the French name) to be exact, in a separate location near where the long line rambles back from the cash registers, hardly a convenient spot. It seemed rude to nudge my way through the line only to one-by-one select, man-handle, read, and eventually set back down all the different boxes from Vosges to see what the different flavors were, and then not buy anything at the $8 per 3.5 oz. bar price. I can imagine it: "Oh. Sorry. Not, I'm not in line. 'Scuse me. Mmm. Barcelona bar with hickory smoked almonds and sea salt? Yum. Oh, but for 8 bucks? Nah. Oh, scuse me..."

Portion size is another problem. I used to love going to Fog City News when I lived in San Francisco because not only did the shop stock an impressive variety of chocolates, both national and international, it also carried at least two dozen varieties of small (0.3 to 0.5 oz.) two-bite nibbly things, which sold from maybe $0.50 to $1.50 or so, depending on the quality and how far it traveled.

I loved the ability to just spend just $2 or $3 and walk away with three different things to try, even if they are just a tasting size each. Everyone loves tasting menus, but hardly anyone wants to buy just sample-sized products in a store. Fog City introduced me to the likes of Michel Cluizel, Amedei, Dolfin, Côte d'or, Dolfin, Charles Chocolates, and the "Mozart head" (Google it. It's one of my favorite chocolate confections), almost entirely by suckering me this chocolate micro-payment system.

The New York Chocolate Scene
In New York, I have yet to find my ideal purveyor, but I came close over the weekend.

Here, most "chocolate shops" are confectioners selling their own brand. Take Lily O'Brien, for example. Lily O'Brien makes some dainty, petite chocolate cups that are filled with a multitude of flavorful truffles, but essentially, the store only carries that and a few other miscellaneous products that Lily O'Brien produces. There's no "chocolate" selection, as all the chocolate is from the same source. It's just the confections that are different.

I tried Whole Foods. I tried Food Emporium. I tried a few specialty delis, where I did often find English candy bars. I tried Gourmet Garage, which wasn't half bad, offering a few choice-y labels, but not enough selection for my liking. I mean, I can get Green & Black's in CVS—give me some real selection!

So Sunday, one of the hottest and most humid days so far this summer, I went on a chocolate locating expedition. I made a list of a few shops to find, and hopped on the subway.

Li-Lac
A half hour later, I was wondering through the West Village looking for a big intersection and hopefully a place called Li-Lac Chocolates. Li-Lac is a confectioner, just the kind of place I was hoping to avoid, but by this time, I was trying to be open to new concepts. "Maybe it's not about what I want," I reasoned. "Maybe it's about seeing what's here and embracing it for what it is."

The nice thing about going to chocolate shops when it's 92 degrees Fahrenheit is that you'll have the place mostly to yourself. No one wants to buy or eat chocolate on a very hot day. It's the perfect time. 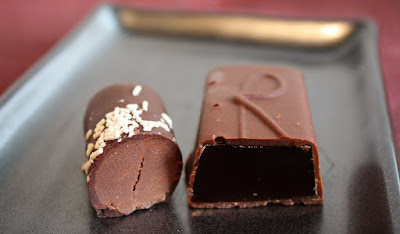 I scanned the glass cases for a long time, ignored all the chocolate sculptures on the top self ("Congratulations, Graduate!"), and steered my attention to the many cigar-sized rolls and bars on display. They were variously filled with nougat, caramel, marzipan, and more.

An unusually large raspberry jelly bar caught my eye, so I got one in milk chocolate (they were out of dark), and asked for a dark chocolate mocha roll for good measure.

Adjectives cannot do justice to that jelly bar. It's not something I would normally have picked at all, but I am so astoundingly grateful that I did. I would travel across town for this thing. Luckily, Li-Lac has another location inside Grand Central Terminal, which is not all the way across town from where I work; it's only a 15-minute walk.

Back to Bars and Grocery Stores
My next stop was Gourmet Garage, mostly because I had passed one en route from the subway to Li-Lac's. And between there and the next place was a Gristede's, so I had a look around there, too. Gourmet Garage had a few interesting things, maybe two or three small domestic purveyors, but not nearly enough to give me any kind of satiety. Gristede's, which always reminds me of the Hamptons for whatever reason, had nothing of interest whatsoever. Only go to Gristede's if you need a Hershey bar to melt and use as driveway sealant.

Boutiquey Bespoke
Next up: Bespoke Chocolates, an out of the way place, literally off the map on "Extra Place" (Google maps knows it, but my printed map did not).

I haven't yet tried the two single-bite, liquid caramel center, pretzel and sea salt sprinkled truffles I spent $2.25 on each, but I can tell you I'll never go back to this place no matter how good there are. Not only is Bespoke down a newly constructed alley, it also carries almost no product. There were maybe a dozen flavors of truffles to choose from, and maybe only 8 or so of each kind. The store looked nice, but was very bare bones, if boutiquey. It could have been a front for mobster activity if the walls hadn't been painted dark purple.

On multiple levels, is simply not what I had pictured. Never mind whether I was open to trying new things, this was clearly not what I was after.

Dean & Deluca and Vosges
It was a little bit more of a walk, but my next stop was going to be Vosges' shop in Soho. Having been out for a stroll for the last two hours, through streets crammed with sweaty bodies, I was getting tired and as a result, a wave of acceptance washed over me.

"Li-Lac seemed pretty good," I thought. "Maybe the lesson here is that I can't have expectations. Maybe I'm supposed to explore all the chocolate New York actually does have to offer me, and look at through fresh eyes. Maybe that's the only way I will love what there is rather than lament what there is not."

"It's kind of like going shoe shopping," I thought. Shoe shopping is a particularly painful event for me. My needs are very particular, and I usually go in knowing precisely what I need and want, and end up not being to find anything that fits that unrealistic ideal. Blind to anything that doesn't conform to my preset standards, I inevitably always pass up a ton of great stuff. I never shoe-shop alone anymore. I need another person to push me into making a purchase, even when I am convinced the shoes are not going to perfectly meet my needs and wants.

Anyway, on the way to Vosges, directly in my path there was a Dean & Deluca. 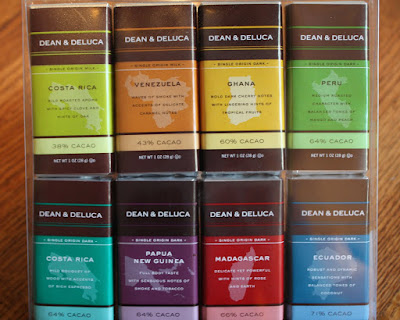 When I first started whining about my lack of a good New York-based chocolate shop. I railed against even considering Dean & Deluca. People either love it or hate it they same way they either love or hate Wal-Mart, Starbucks, and Subway sandwiches (though why do those same people always go ape-shit over Target?). Whatever. Dean & Deluca; corporate empire and all around bad guy. I get it. Peer pressure is what makes me feel bad about actually liking Dean & Deluca. 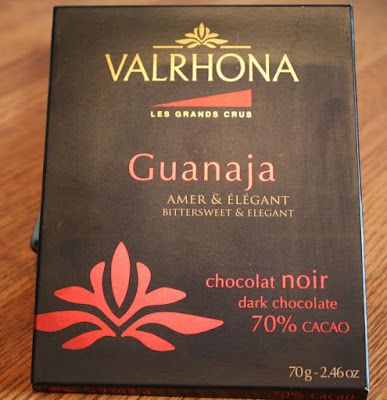 I was shocked to find that the selection at the Soho store did in fact did meet my ideals by about 80 percent. Considering that a few months ago, I had been in a different Dean & Deluca on the upper east side, ridiculously hungry and searching for something to nosh on, and after much deliberation, I bought nothing. I had been looking for a healthy snack to eat before meeting some people at the Met, and found only a few things that met my needs, but every single thing cost double or triple what I thought it should cost. Had someone twisted my arm, maybe I would have paid $2 for a small nuts-and-fruit bar—but $4.50? Hell no.

Similarly, the Soho Dean & Deluca had plenty of things I wanted, but not at the price I wanted to pay. Among those things was an $11 or $14 (one can quickly forget the price of things one is not willing to pay for) box of blood orange pâte de fruits drops that looked remarkably darling and juicy. A box of soft licorice from Finland caught my eye, until a price tag quickly diverted it. In the back of the store, I played momentarily with a no-frills spice grinder, whose tag read upwards of $40.

Coming to terms with Dean & Deluca, I leveled with myself. "I live in New York, where things cost more, and sometimes you just have to pay extra to get what you want." I spent a good 30 minutes turning over chocolate bars from Amedei, Dolfin, Michel Cluizel, Valrhona, and Scharffen Berger. On the lower shelves, I found a few more Italian bars that I was less familiar with.

After what seemed like much too long a time, I settled on a Dolfin Noir Au Poivre Rose ($3.75), a Valrhona Guanaja bar ($7.50), and an assortment of Dean & Deluca's own single-origin chocolates ($12), which were displayed in their package from lowest percent of cacao (38) to highest (71). If D & D had such a surprisingly strong selection, perhaps their own chocolates would be pretty good as well. 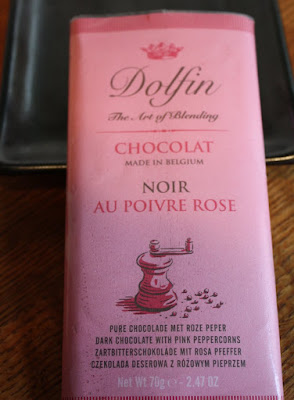 Well, not so with the Venezuelan (43 percent) bar! What a disappointment that thing was! I brought it to work with me yesterday, and it tasted completely stiff and waxy. I expect any chocolate that has a low cacao count to be creamy, and this was not. Cadbury is far better than this stuff, and I admit that Cadbury can punch you in the face with sugar. A Dove bar is better than this stuff. A Hershey's Symphony bar is better. I was seriously ticked off about that.

I'll still try the darker bars to see if they are any better, but if after tasting two more with no better results, I'm going to write to Dean & Deluca and ask if they offer a satisfaction guarantee, because I was not satisfied and would like my 12 bucks back, thank you.

My final stop was the Vosges shop. Had I been in the mood for exotic ice cream, I probably would have hung out there longer. Most of what lines the shelves you can find for the same price ($7.50-$8) in the high-end grocery markets, but behind the counter are truffles, ice cream, and "haut" hot chocolate.

I had my eye on an enormous box of peanut butter bon-bon-like truffles that are sprinkled with sea salt, but I couldn't muster up the near-$40 to splurge on that. Vosges offers a bar with the same ingredients, but a bar and a bon-bon are not an equal match, especially when peanut butter is involved.