Mild Tastes, or Why I Ate the Tofu 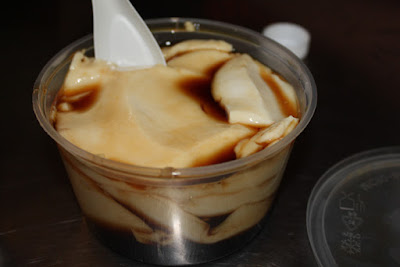 What happens when we taste food that contains more spice, more herbs, new flavors, and brighter colors than what we're used to?

In the book The Taste of Sweet, the author mentions that Americans got hooked on convenience foods that had those elements: sweet and colorful sauces (think Heinz ketchup, for example) and stronger spices, as in Kentucky Fried Chicken (an Asian favorite, I should mention) and many make-at-home, premixed, quick-cooking meals of the Betty Crocker and Duncan Heinz variety.

My friends and I (three Americans and one Malaysian) were browsing menus in a slightly upscale Cantonese restaraunt in Kuala Lumpur earlier this month, enjoying a decent meal out as part of our vacation in Southeast Asia. The plan was to eat family-style. As we starting calling out the dished that we wanted to order, it became apparent to me just how much the American palette favors strong flavors, highly spiced foods, and dishes whose focal point is meat.

What happened was I wanted to order tofu in bean curd skin. The two other Americans struck down the suggestion ferociously, as if I had just suggested we lick the walls of a nuclear reactor. They jumped on the very idea "bean curd skin" like it was an affront to their dignity. Their refusal would not be compromised, and had I order it even for just myself, they would have batted it off the table like a cockroach.

Seeing as we were dining family-style, I let it go, but not without a few words on the matter first.

The softer foods in "ethnic" cuisines balance the more assertive ones on the table. Bean curd's light flavor and texture contrasts well with the heftier foods. A silky tofu dessert leaves the mouth tasting refreshed and soft. Bites of a fluffy egg omelet (which we did order that day at lunch) float through the mouth and down to the tummy quietly, unlike the slurpy noodles that slither around the tongue. Clear and cold broths, cups of yogurt, steamed savory custards, and a final plate of fresh sliced fruit all serve the same purpose.

But these options are often missing or diminished on menus in American restaraunts that attract a majority of Western diners. Soft foods with subtle flavors are pushed to the end or omitted entirely and can only be found in restaurants that cater mire to immigrang customers from the motherland.

One thing my friends convinced me of is this: You can't change someone cultural palette easily. It's developed from a very early age, and while many people will enjoy foods from other cultures, they usually don't want to eat outside of their cultural palette for more than a few meals in a row.

It's understandable, of course, but I hadn't even thought of it in those terms before.

Let me tell you about the two photos on this post. They were taken the night we had an extreme pig out at midnight, after a very long day of traveling from Koh Phi Phi, Thailand, to Penang. We took a long-tail boat, a ferry, a car. We crossed the border. We drove in the dark. We got a little bit lost getting to the right spot in Penang, and then we had trouble finding parking. By the time we reached our feedbag, we were all ready to just descend upon it like Tazmanian devils.

My friend, Tong, did the ordering while five of us squatted a picnic table in a huge food market. Tong disappeared, circled the scene, and placed orders like they were bets at a race horse track. Then the food started coming... and it dish after dish, it didn't stop.

These two photos are of tofu desserts that arrived at the table early, mostly because they didn't require any cooking time. Order them, and they come straightaway. As hungry as we were, no one really wanted to eat the tofu dessert except me. I started to worry that I was hogging it, and that I was filling up on dessert before any of the main dishes hit the table. But I really enjoyed them, especially the one with the dark sauce. Silky mouthfuls of tofu, cool but not cold, sweet but not sticky, slithered down my throat. I picked up the little plastic soup spoon again and again, then darted my eyes around the table once more to check: "Do you guys want some of this?" Everyone waved it off with the flick of their hands, waiting instead for char-siu, spiced fish packets in banana leaves, greasy noodles, deep-fried pigs' ears, a whole fish filleted and charred, and more and more and more. And no one else ate the tofu.

I didn't eat every bite of it. There was just too much else to try. But I did savor the contrasting flavors and textures, looking to the tofu for balance and serenity. 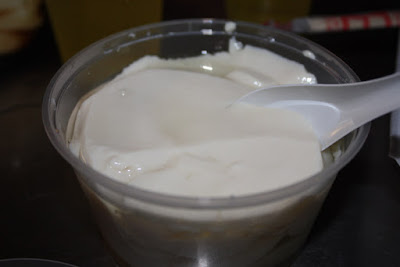