Updating 'I've Eaten Recently At' and 'I'm Eating Next At' Lists 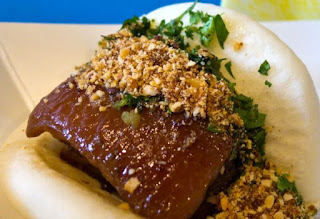 I just finished updating one of the sidebars on the right edge of this blog. The lists show restaurants where I plan to eat next (the one I just updated) and where I've eaten recently.

The "I'm Eating Next At" list now better reflects places I actually will go in the next three to six months. Prior, it named a number of restaurants that were on my long-term list for New York City, meaning a lot of expensive restaurants. It would take me several years to get to half of them. So the list is now more focused on my local neighborhood and affordability.

The "I've Eaten Recently At" list is updated at least once a week, unless I haven't eaten anywhere new. I started it in May 2008. A few comments about what makes that list:

Second, I only add places where I've eaten for the first time. For example, I had dinner at The Fatty Crab in August, but you won't find it on the list under the August 2011 entries because I also eat there several years ago.

Third, it doesn't necessarily mean I enjoyed the meal. Email me if you have questions about a restaurant that appears on the list.

Fourth, it only includes restaurants where I've eaten food. If I only had a drink, I usually don't list the restaurant, although there are a few exceptions. If I go to a coffee shop or bar, I won't list it. But I do include bars and pubs that serve food, when I actually eat there.

Fifth, and last, what appears in the sidebar is only the most recent 25 restaurants. You can see the complete list that began in May 2008 here.