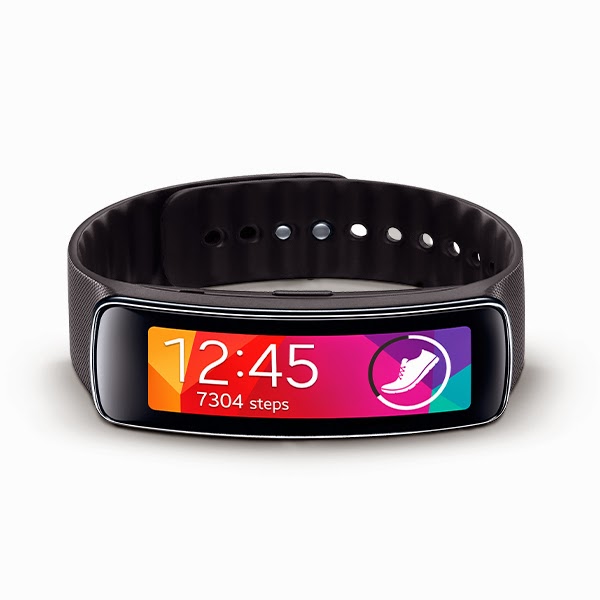 I test a lot of fitness trackers, everything from runner's watches to Fitbit smart pedometers. And I spend a lot of time picking apart what makes them great and what makes them duds. Here are a few ideas for how they can be better:

1. Touchscreens
Touchscreens are ubiquitous among smartphones. Several activity trackers use them, too, such as Samsung Gear Fit (shown), Microsoft Band, Basis Peak, and Fitbit Surge. The problem with touchscreens is they require a steady hand. When you're outdoors, running or riding a bicycle, and when your heart rate is elevated, it can be very difficult to navigate a device by touch with any grace. Touchscreens don't work well when the user is active, and so they don't work well for activity trackers.

I favor fitness trackers with buttons that you can press and feel. They are much better when you're moving around and wearing gloves.

2. They're Missing the Right Heart Rate Indicators
I love all the new wearable tech that use built-in optical heart rate monitors: Basis Peak, Wellograph, Mio Fuse, Fitbit Surge, and the forthcoming Apple Watch. These devices take your pulse through the skin of the wrist, so you can wear something that looks like a watch or a bracelet and have it work like a chest strap heart rate monitor. The problem is very few give heart rate feedback in a way that's smart and easily accessible during a workout.

3. Wrist Space
The most common reason I look at my activity trackers is to tell the time. Those that don't double as a watch and have a time readout on them are just taking up valuable real estate on the wrist.

4. Static Form Factor
Clip-on fitness-tracking devices just didn't catch on they way Fitbit seemed to think they would when it created the Fitbit Ultra (the company's first commercial device), Fitbit One, and Fitbit Zip. But clip-ons tend to be more accurate than wrist bands for counting steps and estimating distance traveled. Additionally, women can wear them tucked onto the front of their bras, which is great if you're going out and want to continue tracking your activity (an evening of dancing, anyone?) but don't want to wear a sporty silicone bangle.

The only big-name clip-ons still on the market are made by Misfit Wearables (the Shine, shown, Flash, and some newer models in the Swarovski-co-branded lined) and Jawbone with its Jawbone UP Move. What makes these devices extra smart is they aren't just clip-on devices but also come with a wristband, letting you choose how and where to wear it. Being able to change form factor from a clip-on to a wristband is so much better than having a static form factor.