Pinkberry
“Pinkberry…” In the weeks leading up to a recent business trip to Los Angeles, "Pinkberry" became a magical invocation. The word conjured up images of a swirling lightness, something Milan Kundera could have described, a sweet and willowy uplifting of the soul. I had read about the Pinkberry phenomenon in The Los Angeles Times and The New York Times online, in blogs and in restaurant review web sites. One of my L.A.-savvy co-workers even relayed his experience with Pinkberry (and Kiwiberry, a knock-off competitor) to me second hand, which was enough to set me drooling.

I promised the co-workers who were traveling with me that we would make a hajj, straight from the airport if necessary, to this holy land of frozen yogurt in Marina del Ray and gorge ourselves on non-fat frozen yogurt before our $75 per plate dinner at an awards ceremony. We rented a car. We sat in traffic. We suffered through bad radio stations.

Six miles later and 20 minutes later, we found the petite Pinkberry in an outdated looking shopping plaza and eagerly waited in line. The beauty of Pinkberry—aside from its frozen yogurt being fat free, aside from it having only about 25 calories per ounce, aside from the bounty of fresh fruit toppings, like plump blackberries, blush red raspberries, and silky mango chunks—is that its fro-yo tastes as tangy and distinct as real cultured yogurt.

Anticipating that wonderful sour dairy flavor, I scooped into my five ounces of Pinkberry with aplomb. The texture threw me off: I had expected the mass to move like sticky gelato or pull like taffy, but it was more inclined to break than stretch. At first bite, the tang was slightly stronger than I had imagined, and quite marvelously so, but the temperature was unexpectedly colder.

As I dished through the cupful, I became mildly interested in the structure of the frozen yogurt, wondering why it snapped instead of stretched and how it managed to melt unevenly. Unlike ice cream, which melts slower and can be mixed into a silky shake, Pinkberry's frozen yogurt goes from icy to liquid very rapidly, which I'm guessing could be caused by an absence of stabilizers and fats.

The caloric count of an ounce of frozen yogurt can be deceptive to the nutritionally uninitiated. 25 calories per ounce—the amount in Pinkberry's plain frozen yogurt—is about what one finds in a low-carb ice cream. And at 25 calories per ounce, an 8 oz. yogurt weighs in at 200 calories, plus whatever fresh fruits and/or cereals (Pinkberry also has some fattier options, like almonds, chocolate chips, yogurt chips, and crushed Oreos), so let's say conservatively that's 250 calories. That's a sizeable snack, but still pretty decent if you're counting it as dessert. The most common serving at Pinkberry seems to be the 8 oz. cup with your choice of three toppings for $4.95. The smaller 5 oz. cup goes for $2.95 without toppings, about $3.50 with one topping, plus about a dollar per additional topping, making it an economically bad choice to get the smaller cup with three toppings. But since it's really the toppings that sell the yogurt, opting for the smaller cup with only one selection also seems like a poor choice.

Over the course of one weekend, I returned to Pinkberry twice more, though on the final visit the line was so long I had to forgo it.

Pinkberry has at least 13 locations in the Los Angeles area, plus three now in New York. When, o when will one open in San Francisco?


Marouch
Without much of an agenda for my two days in L.A., I sought out a few "cheap eats" restaurants and decided to just drop the pretenses and make eating the focal point of my trip. On the web, I found references to a place called Marouch that promised enormous platters of Lebanese food for less than $10 per person; in real life, I found a dingy store front in yet another ill-kept small shopping plaza in a very low-income, predominately Latino/a neighborhood.

Boyfriend and I headed over for a very early dinner and nearly turned away after sizing up the neighborhood (while there's nothing wrong with hanging out in a rough hood, it's always wise to know the surroundings pretty well before it gets dark—which we didn't). We thought that at 6 p.m., the restaurant would surely be dead and we'd be the only kids in the house. But even at this Golden Girl eating hour, there were already people seated and more cars waiting for parking spots in the miniscule lot. And by 6:30, when we were just starting to nosh, at least six tables had been filled.

From the inside, the restaurant seemed far removed from the hustle of the street outside. A low table at the front of the house displayed four antique-looking Turkish coffee pots, and an extended bar area toward the back connected to the mostly-hidden kitchen. What struck us most about Marouch was the smell of roasting meat and aromatic spices.

Severs ushered to our table a basket of warm pita bread, a plate of refreshingly pickle-y pickled turnips, purple olives, whole scallions, and pickled hot peppers. My entrée of kafta kabob over rice ($11.99, spiced beef meatballs grilled on skewers, which I’ve also seen written as “kofte,” unless that’s a slightly regionally different dish) measured up in my book as being enough for two. The menu offers a choice of kafta made from beef, lamb, or chicken, which I found odd since I thought kafta specifically was made of beef. I ordered the chicken, and I got beef anyway.

As a rule, I generally don’t eat beef. I don’t like it; I don’t like how it smells; and I don’t like how oily it can be. But I was feeling adventurous and what was laid before just looked clean and simple, so "what the heck?" I thought. And I ate it. Correction: I ate half of it. I didn’t stand a chance against such an enormous portion. The meatballs, which didn't have a single drip of fat left to them, were rich and earthy and full of flavor.

Boyfriend dug into a huge mound of shwarma gyro (spiced lamb, $11.99), shaved into long strips and served with a side of velvety tahini. We both enjoyed the rice immensely, savoring the individuality of each toothsome grain. After delightfully strong and sweet Turkish coffees, and with one beer and one large bottle of sparkling water on the bill, I think we ended up paying about $30 for the two of us, tip included. We didn’t even touch the mezes, though I ogled heaping bowls of tabbouleh ($6.99), which is one of my all-time favorite foods, at nearby tables.

I can’t say enough of about the attentive waitstaff. At Marouch, Boyfriend and I were not only treated like pashas, but we ate like them, too. 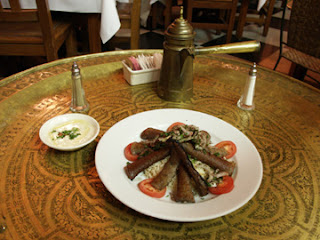