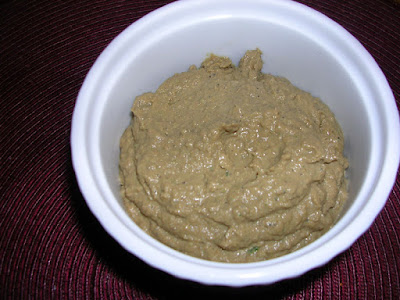 Before ringing in the New Year, I’ve decided to revisit all those resolutions I made for 2008 and squeeze a few in while I still can.

I’m embarrassed to say where I got the recipe, but let’s just say it was from a television cook, who is not a chef, and who now has a daytime talk show. The recipe is so simple that it has been in my head for about two years without me having ever written it down or looked it up.

Because I’m not about to feed a party of 50 people, I cut the recipe more than in half. But I didn’t want to cut it too far lest the ingredients become out of whack. Wherever I wind up on New Year’s Eve and New Year’s Day, I’ll be toting along a ceramic dish of pâté and a crusty baguette.

The recipe was so easy and all the ingredients were extremely easy to find, including the chicken livers, which I got from the grocery store that has a butcher on site and a well-stocked meat section. It’s the kind of market where you can buy lamb’s kidneys, cow stomach, veal tongue, and of course, chicken livers. Three-quarters of a pound only cost $1.16. 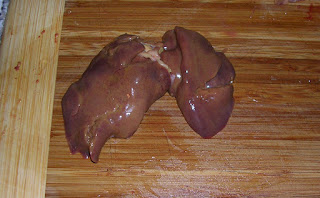 Having never worked with chicken livers before, I took seriously the instructions to rinse, pat dry, and trim them very well. The photo shows how they look before being trimmed. Though they were very well cleaned when I opened them, I liberally removed any remaining bits of membrane, specks of blood, fat, and what not.

Over low heat, melt the butter and add the onions, sweating slowly and gently, and after a few minutes, add the bay leaf and thyme sprigs. Partially cover the pot and let the onions cook very slowly until fully wilted, translucent, and almost breaking down, about 20 minutes, stirring a few times, but not too often.

Meanwhile, rinse and pat dry the chicken livers. Trim all the shit off them. All of it.

Cut the livers if they are big into pieces about the size of a single clove of garlic. Add the livers to the pan and turn the up the fire to medium-low. (Another way to do this is to move the onions to the edges of the pan and add the livers into the center hot spot where they can cook a little faster without browning the onions.)

Add a pinch or two of salt and a good pinch of black pepper, preferably fresh-cracked. Continue to cook gently (if using parsley, add a few leaves during this final cooking process) until the livers change color fully on the outside but are still slightly pink in the center, maybe 10-15 minutes or so. Their color will be grayish brown. It’s kind of ugly. 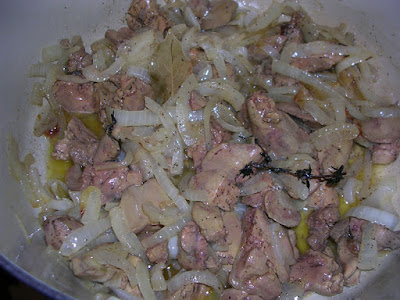 When the livers are cooked (the photo shows them at the halfway point), close the fire and let them cool for a few minutes. Then move them into a food processor and grind them, slowly at first. Finally, grind them for a few flashes on high so that the mixture is almost smooth but still has a hint of meatiness to it.

Cut a circle of wax paper to fit the top of the dish you plan to use for the pâté. Ramekins or other ceramic dishes work well. Spoon the pâté into the ramekins and if you like, lay a single parsley leaf directly in the center. Set the wax paper circle directly onto the pâté and press it down, as if making a skin to cover all the pâté. Cover a second time with plastic wrap or foil and refrigerate.