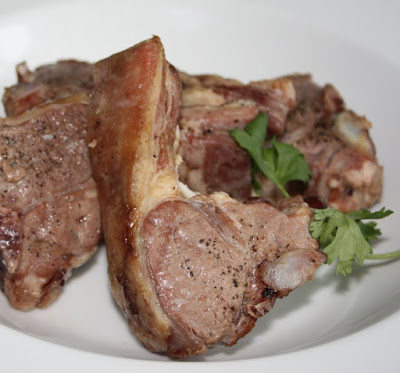 Unlike the subtle nature of, say, a delicate white fish, lamb asserts itself. With its bold flavor, it stands up well to accompaniments, sauces, and marinades without losing its integrity.

I find lamb a bit too rich for my taste. On the rare occasions that I do eat it, it's an ounce or so at a time, and if I'm making so little of it, I might as well just embrace it for what it is and let the meat speak for itself.

Yesterday, I made this version of grilled lamb, though I had to improvise a grill. Sprinkle garlic salt and pepper on the meat, which should be a rack of lamb that has been cracked. I talked to my butcher, but I don't think I actually got the cut I was looking for, as you can see by the photos.

Set lamb on foil and place foil over a hot grill. I set the racks in the main part of my oven to the lowest they could go, turned on the broiler and then put the lamb and foil directly on the oven racks. This seemed to work pretty well, though the heat still was trapped in the oven and proceeded to cook the meat from all directions, rather than from primarily below. When then the meat is nearly cooked to your liking, sprinkle it with beer.