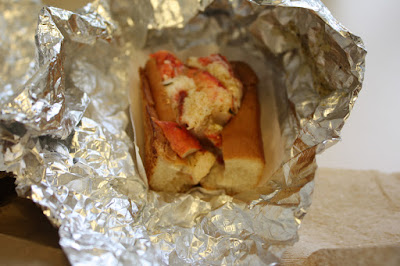 Lobster purists, like me, will only eat a lobster, meaning the whole crustacean, boiled with melted butter optional, and even then, the butter only goes on certain parts. The tail can get a dip of butter, but not the precious claw.

There is no reason to adulterate lobster meat with anything else. Don't put it in risotto. Don't chop it to bits and strew it through linguine. And don't you dare split the poor creature in half and broil it. (Langoustines or spiny lobsters, fine, but real lobsters, no.)

The only other acceptable treatment for lobster is to use the discarded shells to flavor a broth.

So when my friend swore up and down that Luke's Lobster dished out terrific lobster rolls, I said, "Eh, no thanks. Lobster rolls don't do it for me. I don't mess around when it comes to lobster."

Had he not grown up on Long Island (like I did), where lobsters are plentiful and lobster purists even more prevalent, I might not have taken him at his word.

Luke's Lobster takes pure lump lobster meat and does almost nothing to it, and that's why it's so special. It's put on a very minimalistic toasted roll—nothing more than wimpy white bread, thankfully— with a dash of mayonnaise, a flick of lemon-pepper butter, and speck of seasoning: thyme, oregano, celery salt, salt, and black pepper.

The main complaint I've heard is that the price is too high. When I went last week, a hot dog sized lobster roll was $14. I got the "snack" size, which measured about the length of my index finger, for $8. The reason I ordered just a sampler portion was because I also wanted to try the crab meat roll—$5 for the petite sandwich.

All together, I had the tiniest lunch imaginable for about $14 after tax. But it's not a $14 ripoff. It's $14 worth of pure, fresh, wholesome lobster meat, flown in that day from Maine. What would you pay for a pound of lobster, boiled, cleaned, and picked through? $35 per pound? $40 per pound? The 4oz. lobster roll for $14 is a reasonable price if you think about what you're really buying and eating.

The meat really was divine. The crab was slightly sweet, not as sweet as Dungeness, but more subtle and ... almost personal. And the lobster was as unadulterated and fresh as it gets in Manhattan. 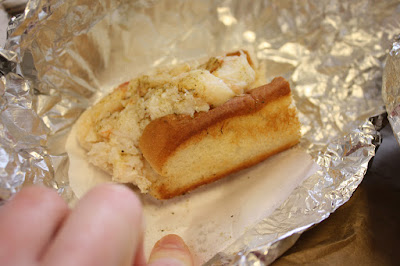