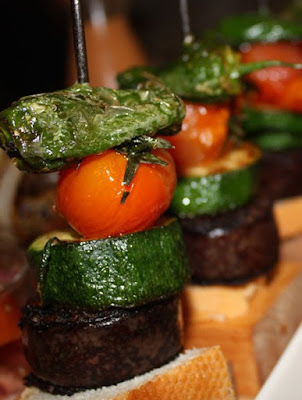 Before the food arrived, servers kept pushing our glasses and silverware way off to edges of the table. "The space is very important!" We had booked a dinner reservation at Restaurante Carosel in Valencia, Spain, based on a mention in a New York Times article, "36 Hours-Valencia, Spain" (January 2011).

Four of us arrived at 9, and the place was not only empty, but the staff were still hanging about and not ready to work yet. The Spanish eat very very late. We tried to plan to eat late, but apparently, not late enough for a Saturday.

The space is modern and sparse, in a simplistic and Scandinavian kind of way. White and wood are used liberally. Symmetry and clean lines make the small restaurant feel wide open. It's spacious, not cozy, and concrete floors give an almost warehouse feel.

Carosel has no menus. Well, a simple paper menu of the day hangs in the window, but it's barely visible. I didn't even notice it until we were leaving. For the food, it was a mere 22 euros each. Given the copious food and drink included with the meal, it's an amazing value. There is a wine list, so we started with a bottle of Cava. That's when "the space" became important.

Two or three times at least, someone checked on the table and scooted all our glasses and silverware to the edges. After 20 or 30 minutes of sipping sparkling wine and loosening up in a deserted restaurant, our waitress heaved an enormous platter of food on a wood pedestal to the table. It barely fit. 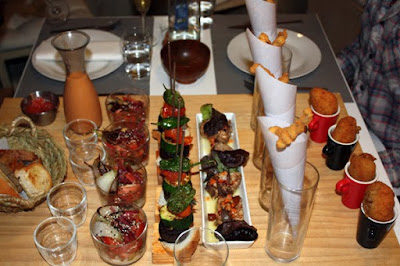 Since there's no menu, you don't have to decide what you want to start. Carosel just gives you everything. On our starter tray that night, we saw X dishes:

1. Pan con tomate, a classic and rustic Spanish food that is almost always offered. Ordinary slices of bread are brushed lightly with the juices of crushed tomatoes. For sentimentality, I like this dish a lot. When I'm eating it, it means I'm in Spain. But for taste, it is totally bland. The bread is never warm. There's no salt. But it's customary.

2. Gazpacho. Bright orange and served in a milk jug, with shot glasses on the side, Carosel's gazpacho looked odd. It was slightly creamy, but beautifully strained. It tasted strongly of cucumber, refreshing and cleansing, while being easy on the tongue. I loved it.

3. Tomato and onion salad. Another star winner, served in wide-mouth whiskey glasses. Sweet roasted slices of onion contrasted with slightly acidic tomatoes bathed in a light balsamic vinegar, with sesame seeds and maybe a drop of sesame oil. Toward the end of the meal, we debated whether this could have been the most impressive and delicious dish we ate that night.

4. Morcilla pinxchons (shown at the very top of this post). As much as I loved the tomato salad, the morcilla pinxchons, or Catalonian tapas served on slices of baguette, stole my heart. Morcila is another classic Spanish food, a blood sausage, often made with rice. Here, a round of morcilla topped a piece of bread, but then was stacked higher with grilled zucchini, a roasted cherry tomato, and a single, not-quite fiery, pimiento. A few flecks of salt made all the vegetables pop with flavor.

5. Mantequilla (butterfish). The fish is difficult to see in the photo, its low profile over shadowed by some of the more elaborately heightened foods, but it was spectacular. It was barely cooked, almost like ceviche, but it was a single piece rather than small cubes. A large but delicate leaf of dark lettuce came with each portion, which was decorated with diced vegetables and more vinegar-infused roasted onion slices.

7. Mushroom croquette. The espresso mugs at the very right of the photo are holding golden, crisp mushroom croquettes. They were creamy and thick on the inside, a touch gluey, a touch heavy.

The only problem with this set-up is that by the time you eat your way to the croquettes, they are cold. It's a lot of food to serve at once.

Seeing as there were four of us, we ordered two fish and two meat. We weren't really sure what to expect for the beef, and I'm not always crazy about red meat. So when it arrived (shown below), I was relieved. The waitress clearly had confused the English words for cow and pig. This was pork. We pulled it apart with forks alone and slurped up little bites of juicy strands, then cracked off pieces of skin and caramelized sugars from the surface. When the waitress came back, we said, "Excuse me. Did you say this was beef or pork? It's pork, pig, right?" 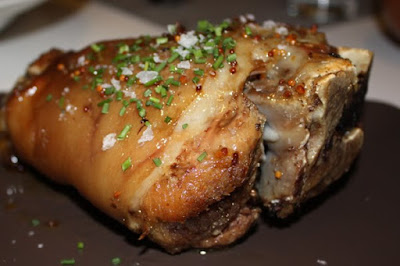 "What part of the cow? Where on the body?" I asked.

She hunched over and pointed toward her shoulder. "Here, but in the front."

Whatever the case, it was incredible, and very similar in color and texture to a pieces of slow-cooked pork. I can only guess it was veal and from the clavicle area of the animal. Veal can sometimes be white or pink in color.

All told, I think we paid 30 euros each for all that food, two bottles of wine, and complimentary digestifs. I'd go back in a heartbeat.