Fish in Vigo, Spain: The Largest Fishing Port in the World 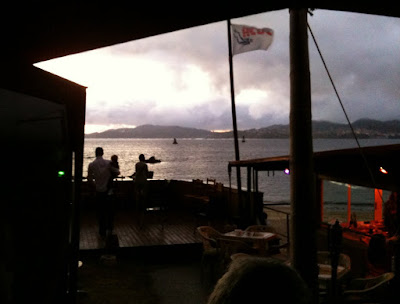 Boyfriend and I just got back from a trip to Vigo, Spain, the largest fishing port in the world. It's on the far north west coast of Spain, just north of Portugal, on the Atlantic Ocean.

We were there for a wedding, and when we booked our flight, we realized we could only spare a few vacation days off of work. But we left New York just as Hurricane Irene started her fury, and we unexpectedly had our flight canceled and had to spend two extra days in Madrid. Talk about a silver lining.

Vigo is beautiful, hilly and chilly. The cool ocean air blowing in from the Atlantic kept the temperature mild while we were there. The picture above is from Los Almos beach. Our friends who got married had a cocktail party there the night we arrived. The sun took forever to sink beneath the lapping waves. I shot that picture at 9:30 p.m.

On the other hand, the sun didn't rise until almost 7:45 in the morning! In the U.S., with Day Light Savings, I'm used to a much earlier summer sunrise. But the Spanish like to stay up late, so the long evening hours fit the culture.

Because Vigo is a major fishing port, we ate so much seafood: octopus, sole, monkfish, oysters, shrimp, and several whitefish that I couldn't immediately identify. In one restaurant, El Capitan, we ate seven different kinds of fish. No one at the table could translate all of them, so I snapped a picture of the menu to look up the names and species later. I'll hopefully find some time to write about that and post more pictures this weekend. For now, I'm catching up on work and trying to reset my internal clock, as I've been waking up before 5:00 a.m. the two days since I've been home.