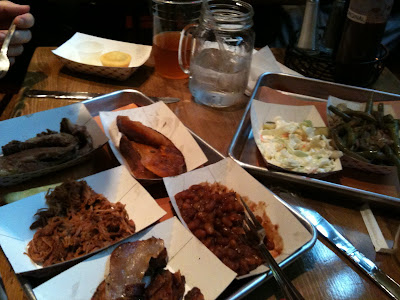 Dinner at Butcher Bar, a new barbecue restaurant in Astoria on 30th Ave., was one of the slightly scrappier nights early this month. I like it, though. We shared a sampler of meats: pork belly (which turned out to be American bacon, and not even slab-cut), pulled pork, and brisket. We also had a side of baked beans, which were sweet and sticky, some green beans, coleslaw, and corn muffins.

The restaurant didn't yet have its beer and wine license when we visited, but microbrews are apparently on the way.